(Taken from my “Reflecting Self” Solo exhibition as partial requirement – MAVA Degree, US)

I am a contemporary visual artist and lecturer who is primarily interested in drawing, drawing research and development on an educational as well as on a personal level.  In my work I explore the transformative aspects of drawing related to identity formation and I investigate specific aspects between the psychological and the spiritual that could contribute towards the transformation of the self.

My recent body of work explores drawing that functions as a valuable vehicle which facilitates reciprocity between the drafter and her life-world.  I propose that this relationship of exchange can bring about transformation of the self.

My drawings are rooted in a psycho-analytical framework, focusing on Self psychology and Intersubjective Psychoanalysis of certain personality psychologists. Valuable links are forged between the transformative potential of drawing, the psychological and the spiritual. Through interactivity between the self and her life-world through drawing, moments of ‘recognition’ and ‘knowing’ occur – concerning hidden ‘truths’ of the self, which could affect personal transformation.  In my work, the “life-world” comprises inner and outer world, a visible and invisible world. The visible world focuses on the interaction of the self with nature and culture, and the invisible world focuses on the interaction of the self with a psychic world, which includes the workings of the conscious and unconscious mind in drawing and their connection with a spiritual dimension.

The spiritual aspect in drawing is researched through the notions of transformative “presence” and the “transcendent function” of drawing.  I explore the psychological and spiritual value of drawings as transformative selfobjects to address the general neglect of the spiritual.  Furthermore, I affirm that there exists a mutually conducive potential and influence that the interplay between the spiritual and the psychological in the drawing process bring about.   As a “selfobject”, a drawing attains its own ‘silent visual language’ replacing or assisting the role of the therapist, becoming pivotal in a transformative ‘interpersonal dialogue’.   Lastly, Jung (Miller, 2004:4) claims that the unification of the conscious and unconscious eventually results in “a living birth that leads to a new level of being, a new situation” (Miller, 2004:4).

An exploration of the emphatic sublime through the experience of awe in drawing and its particular relationship to space towards effecting the transformation of the self and the O/other.

My work can be contextualized or allocated with earlier concepts of the sublime.

I would refer back to 18th Century philosophers such as Edmund Burke and Emmanuel Kant who claimed that the sublime is “an emotion of awe that is evoked in the viewer/spectator for that which is beyond comprehension”.  Burke described the sublime as a feeling of ambiguity (Vaughan 1978:  33) of attraction and repulsion to stir the mind of the viewer.  Beauty, often pitched as the sublime’s opposite, is associated with attractive objects, whilst a sense of sublimity would be caused by objects  with associations of aversion, such as an overwhelming experience of the obscure, mysterious, darkness, vastness, monumentality, vacuity, solitude, silence and infinity (Burke 1990:  65, Vaughan 1978:  33).  Kant similarly characterizes the dynamic sublime as a vibration that attracts and repels at the same time, implying the motion of the mind when phenomena inspire fear or power (Kant 1952:  496, Monk 1960:  8, Miller 1997:  9), which I explore in my large scale portrait drawings of the prisoners that I draw.

Burke’s theory which gave new importance to the disturbing and the suggestive powers of art at the time, (Rosenblum 1975:  17, Miller 1997:  9) claiming that anything that can cause pain or terror can be a “delightful terror”.  Burke continues to underscore that objects either overwhelm us to such an extent that they place a strain on us, or when we encounter dangerous objects from a safe position, its perception causes a weakened state of terror (Miller;  1997:  11).  Burke, thus concludes that our delight in the sublime is then due to the fact that the situation creates a feeling of invigoration (Burke 1990:  122).

I propose that my PhD investigation continues and reviews possibilities of Burke’s sublime particularly in their huge format, darkness, and the awareness that these figures are in prisons, submitted to experiences of deprivation, solitude and fear.

Our experiences in life are a product of processes.  The “dialogues” between myself and prisoners becomes central to the proposed project which attempts to grasp the marks and tones of lives beyond our everyday understanding of humanity:  I am their other and they are my other.

In my proposed PhD research I will seek to explore a rather new uncharted territory of coming to know how the experience of the emphatic sublime (and its’ possible connection to awe) could possibly effect transformation in the self and the other through re-contextualizing and developing my drawings in their particular relationship to a carceral space.

Morley (2010:  12) quotes Thomas Weiskel in his book  The Romantic Sublime:  Studies in the Structure and Psychology of Transcendence (1976):  “The essential claim of the sublime is that man can, in feeling and speech, transcend the human.  What if anything lies beyond the human…?”

Morley further states (2010:  12)  “The sublime experience  is fundamentally transformative, about the relationship between disorder and order, and the disruption of the stable coordinates of time and space.  Something rushes in and we are profoundly altered.  And so, in looking at the relevance of the concept to contemporary art, we are also addressing an experience with implications that go far beyond aesthetics.”

In this proposed PhD research, I intend to contextualize the relationship and interaction with space (inner and outer space) and the prisoners with whom I will interact.

I  currently live and work as a visual artist and lecturer of drawing and printmaking at the Jack Meyer Art Centre in Paarl, South Africa.  I was brought up on a farm called “Rainbow’s End” in the Banhoek valley.  Being surrounded by the beauty of nature since childhood, I developed a growing desire to study art and completed my B.A. Fine Art Degree at the University of Stellenbosch in 1994 (majoring in Painting).  I moved to Johannesburg in 1996 and completed my M. Tech degree studies (cum laude) in Visual Art specializing in drawing and stone lithography at the University of Johannesburg.  After completing a 4 month student exchange, specializing in printmaking, at the Karel de Groote Hogeschool in Antwerp, Belgium, I returned to South Africa to finish my M.Tech studies with a solo exhibition at the Civic Gallery, Johannesburg in 1998.

Shortly after the birth of my first daughter, I moved back to Cape Town and worked as a Visual art and Design lecturer in various institutions.  I am currently employed as a Visual art educator at the Jack Meyer Art Centre in Paarl, which focuses on secondary Visual art and Design education.  Furthermore, I have been involved in various community art projects (through VANSA), presenting different drawing workshops for the Stellenbosch Art Society as well as my most recent involvement in drawing and printmaking rehabilitation workshops, product development and research at Drakenstein Correctional Services in Paarl (DCS).

I am constantly involved in the contemporary visual art scene in South Africa and abroad  –   I participated in various art projects and group shows as well as several solo exhibitions.  My first solo exhibition entitled “A Holy War” took place at the Civic Gallery (1998, Johannesburg, partial requirement for Masters studies) and was followed with several other solo shows – such as  “To a Promised Land” at the Bell-Roberts gallery, (August 2006) and a collaborative exhibition with the ceramicist, Dr Ralph Johnson entitled “Journeys” at the Grande Provence Gallery in Franschoek (March 2007).  These solo shows were followed with another solo exhibition at the ABSA Gallery in Johannesburg, entitled “About Face I” (February 2009) and a follow up solo show entitled “About Face II” was held at the Art-b Gallery in Belville during August 2009.

In November 2009, one of my daughters, Bethany, was diagnosed with cancer.  For the duration of her illness, I only took part in various group exhibitions during 2010.   In 2011 I was accepted to study for a second Masters degree in Visual art, specializing in drawing,  at the University of Stellenbosch.  I recently successfully completed this degree with a solo exhibition entitled “Reflecting Self” of my drawings as partial requirement towards obtaining the degree, at the Equus Gallery, Cavalli Estate in October/November 2014.

I have recently been accepted and have registered towards a proposed PhD in Visual Arts (Practice-Led) study through UNISA on the sublime and its transformative effects on the self and the other through my drawings.  If my proposal is approved at the end of 2019,  I will commence my PhD study in 2020 with Prof Elfriede Dreyer and Dr. Gwenneth Miller (UNISA) as the  supervisors of my study.   Concluding, this proposed study will continue to build on previous notions explored in my body of work that was done in my recent Masters degree show entitled “Reflecting Self”  (2014) as well as my first Master’s Degree exhibition entitled “A Holy War”. (1998) 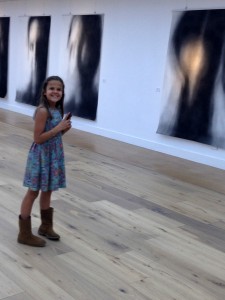 My daughter, Bethany at the opening night of my solo exhibition entitled,  “Reflecting Self”.